The map and pie chart below illustrate land use in the Camp Creek-Wapsipinicon River Watershed. Land cover information for the entire Upper Wapsi River Watershed, as well as information on historical cover, land ownership, and livestock production, can be found on the Land Cover/Land Use page. 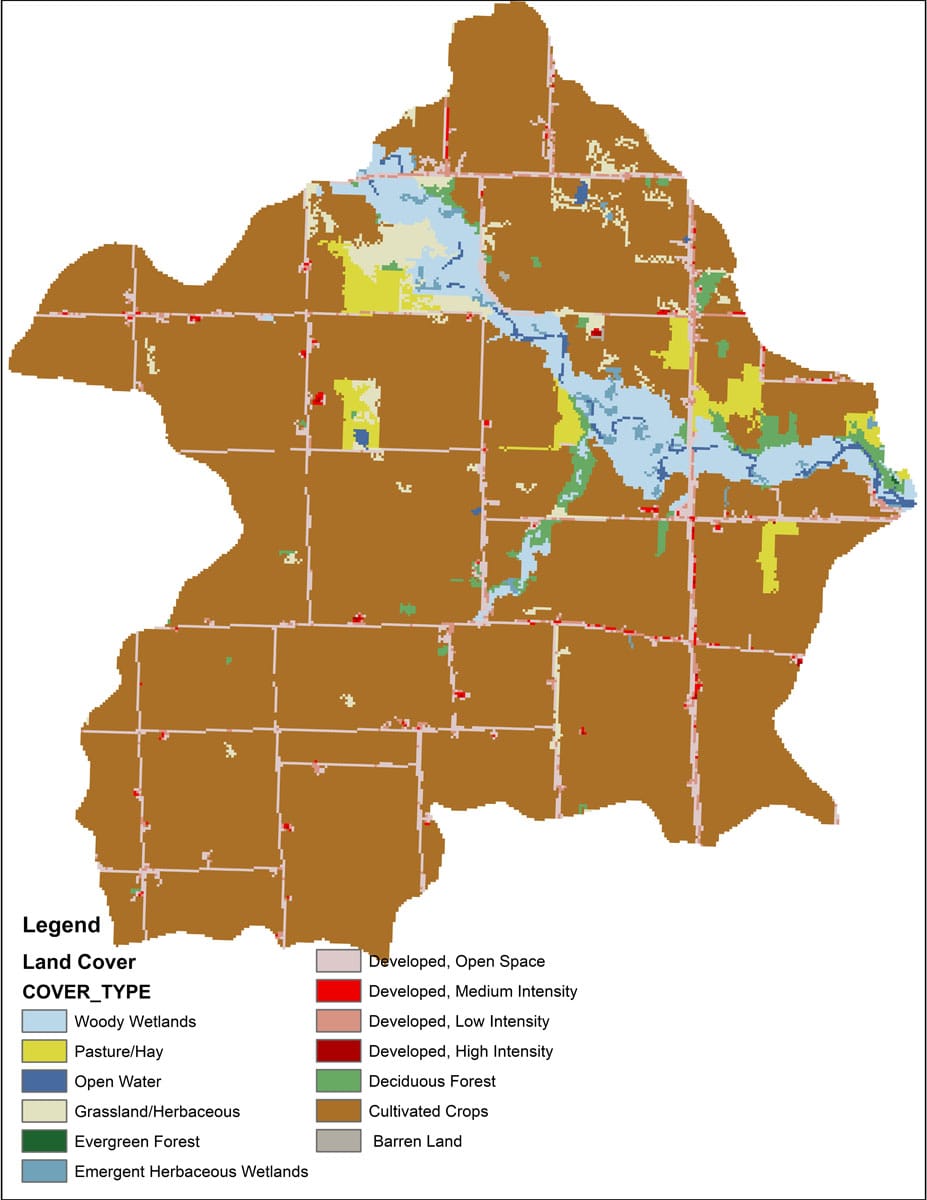 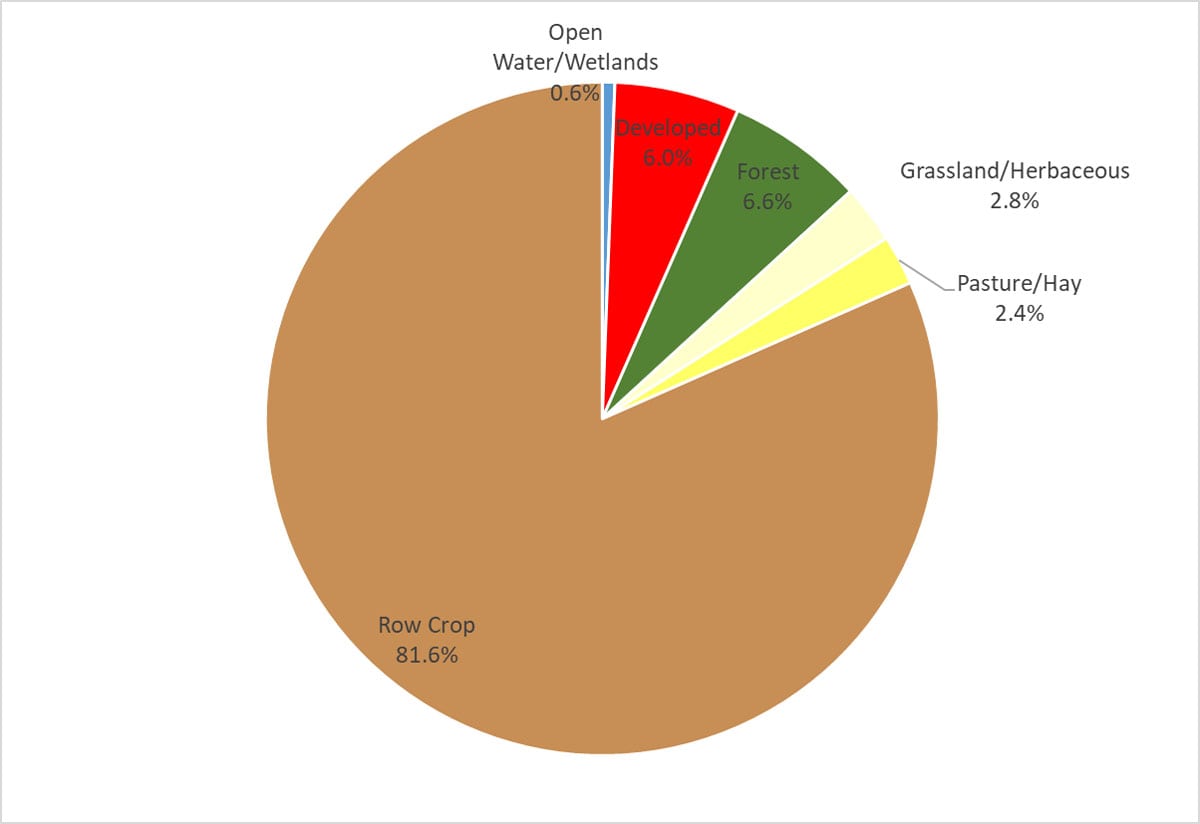 The Camp Creek - Wapsipinicon River Subwatershed is located in the Iowan Surface landform region. The physical characteristics of this landform region contain numerous clues to Iowa’s glacial history. The Iowan Surface also contains some Karst features, such as sinkholes, influence hydrology and provide unique challenges with implementation of detention structures like ponds and WASCOBs.

No fish surveys have been completed at this time.

No impairments at this time.

The Daily Erosion Project estimates soil erosion and water runoff occurring on hill slopes in Iowa and surrounding states. Compare Camp Creek-Wapsipinicon River subwatershed with other watersheds in the Upper Wapsi or with watersheds across the Upper Midwest at https://www.dailyerosion.org/map

In 2017, there were 98.7 acres of cover crops covering 0.74% of crop acres in the Camp Creek-Wapsipinicon River subwatershed as compared to 3.1% for the State of Iowa (2017-2018 Iowa Nutrient Reduction Strategy Annual Progress Report and 2017 USDA/NASS Field Crop Totals).

A GIS analysis was conducted by Iowa State University (ISU) as a part of the Iowa BMP Mapping Project. According to ISU, “The Iowa BMP (Best Management Practices) Mapping Project provides an accurate inventory of BMPs which are essential to establish baseline conditions and document implementation resulting from the Iowa Nutrient Reduction Strategy. The primary focus of this project [was] to create the 2010 baseline inventory dataset, covering a period from 2007-2010 by digitizing conservation practices using aerial imagery and LiDAR derivative data.” The project specifically identified existing BMP structures that could be viewed on aerial imagery, including ponds, water and sediment control basins (WASCOBs), terraces, grass waterways, and contour buffer strips. The Iowa Best Management Practice (BMP) Mapping Project identified 17 pond structures and 19 WASCOBs in the Camp Creek-Wapsipinicon River subwatershed. Camp Creek-Wapsipinicon River also contains many miles of existing grass waterways and fields with contour buffer strips, which provide deep-rooted vegetation within agriculture fields to help infiltrate and hold water. 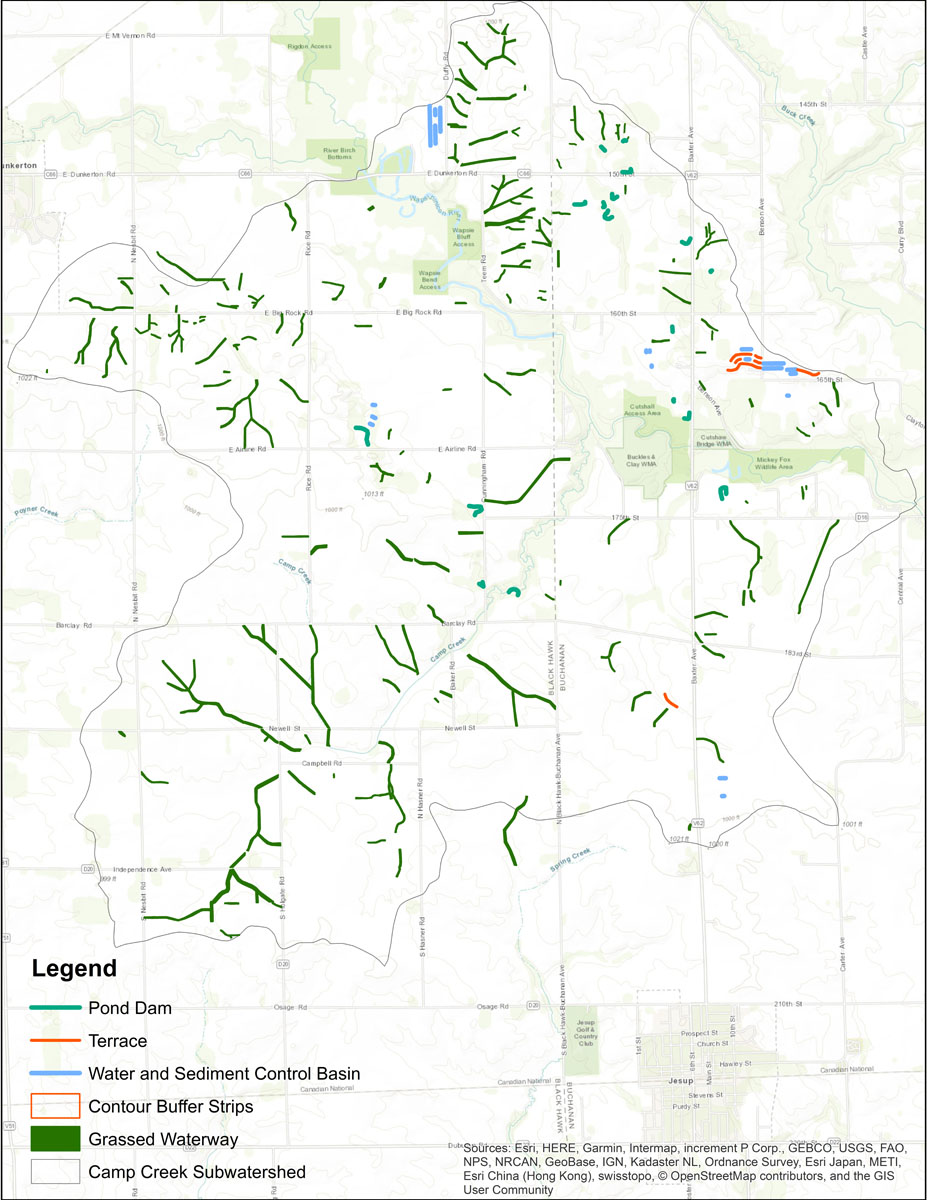 The Agricultural Conservation Planning Framework (ACPF) is a concept for agricultural watershed management supported by high-resolution data and an ArcGIS toolbox, which are used to identify site-specific opportunities to install conservation practices across small watersheds. This non-prescriptive approach provides a menu of conservation options to facilitate conservation discussions on farms and in community halls. The framework is used in conjunction with local knowledge of water and soil resource concerns, landscape features, and producer conservation preferences to provide a better understanding of the options available in developing a watershed conservation plan.

In 2018, the Iowa Flood Center utilized the ACPF toolbox software to map ideas for conservation practices in the Upper Wapsi River subwatersheds. A map and a summary of results for Camp Creek-Wapsipinicon River follow:

The Wapsipinicon River stretches over 290 miles from the Iowa/Minnesota border all the way to the Mississippi River near Clinton, Iowa. Although it only extends two miles into Minnesota, the Wapsipinicon River is the fifth largest Iowa tributary of the Mississippi, being surpassed in length only by the Des Moines, Cedar, Iowa, and Skunk rivers. It is a long narrow watershed that for 180 miles averages barely more than 15 miles wide and thus it has no major tributary.

Even though it is narrow, this watershed covers 4.5% of Iowa. The Wapsipinicon River boasts the longest, continuous stretch of natural and scenic river corridor in the Iowan Surface Region of Iowa. Much of that river corridor is in public ownership and dominated by wooded wetlands and riparian forests that provide habitat for birds, reptiles and other animal species, as well as birders, boaters, paddlers and anglers.

The Upper Wapsipinicon River, or Upper Wapsi, is a section that includes the 270 miles of river above Anamosa, Iowa. The Upper Wapsi Watershed drains over 1 million acres and encompasses all or portions of 11 counties, 27 communities, 17 unincorporated villages, 120 lakes and 8 major rivers and streams totaling over 2,000 river miles.